An Intergenerational Approach – Distant but not Isolated 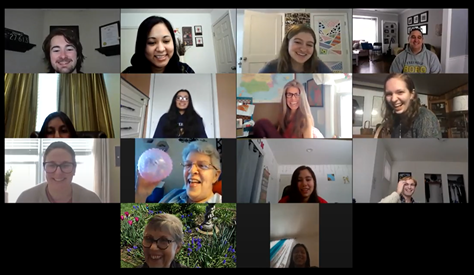 Haven’t you heard that many of the most incredible discoveries happened when someone found something they weren’t looking for?

For instance, let’s take a look at the discovery of insulin – In 1889, two doctors at the University of Strasbourg, Oscar Minkowski and Josef von Mering removed the pancreas from a healthy dog trying to understand how this organ affected digestion. They noticed something abnormal and unexpected a few days later, flies were swarming around the dog’s urine. Sugar was found in the tested urine, which made them realize that removal of the pancreas has caused diabetes to the dog.

Decades later, this chance discovery of the link between the pancreas and blood-sugar levels allowed researchers at the University of Toronto to isolate a pancreatic secretion that they called insulin. Their team was awarded the Nobel prize in 1923, and within a year, the pharmaceutical company Eli Lilly was making and selling insulin.

While isolation of pancreatic secretion revolutionized medicine, isolation of meaningful relationships (social isolation) has emerged as critical public health issue in recent years. Research confirms that social isolation is a risk factor for physical and mental health problems. Before the pandemic, 22% of adults in the US “often or always feel lonely, feel that they lack companionship, feel left out, or feel isolated from others.” according to a study by the Kaiser Family Foundation. Additionally, an AARP study recently found that Medicare spends an additional $6.7 billion annually on enrollees who are socially isolated. Most recent studies show that social isolation is also taking a toll on the youth’s physical and mental health.

Let’s take a look at another “accidental” discovery of intergenerational approach – In 2017, members of Neighborhood Connections to Health (NCTH) coalition worked on their blueprint for action. Priorities in this blueprint were informed by health status indicators and focus groups conducted amongst specific Freehold Borough populations, such as youth, seniors, Latinos, African Americans, parents, and residents who struggle to secure food or housing. One of those priorities was to enhance access to community physical programs in Freehold. Coalition members further looked for evidence-based strategies at the County Health Rankings & Roadmaps. Intergenerational communities were a suggested strategy as this increases civic participation and social connectedness, a need that was also identified in the focus groups, which may improve physical and emotional health among older adults.

Although the link between social connection and physical/mental health is well known, learning about the evidence-based approach to community building was a chance discovery for the coalition group.  This inspired them to have an intergenerational subcommittee working towards building a community council of all ages, cultures, and abilities. For the next couple of years, this subcommittee successfully fostered civic participation and connections among community members.

In December 2020, the Freehold Intergenerational Community Council, known as FICC became a reality thanks to the financial support from the New Jersey Healthy Communities Network. FICC, coordinated by NCTH adopted the Communities for All Ages model and currently undergoing Leadership for All Ages Training.

2020 as we all know it was a very challenging year and it seemed almost impossible to recruit candidates for FICC when gatherings were not allowed. However, over 70 Freehold residents applied in a 4-month period through different creative ways. The selection process took place in the summer and was unique as 6 members from the large pool of applicants were intentionally chosen to lead the selection committee. December 10 was a date to celebrate, 16 members were inducted to FICC!

In January 2021, FICC began a 6-month virtual leadership training with an individual & collective mindset creating a safe space for all to create shared visions, engage in collective action, in a Distant but not Isolated Intergenerational Approach.

Freehold Intergenerational Community Council (FICC) may have come from an UNINTENTIONAL discovery, nonetheless, it INTENTIONALLY brings diverse age groups together to address social determinants of health that affect people at all stages of life.

Neighborhood Connections to Health (NCTH) is a community non-profit organization, which began as a portion of the work of the Visiting Nurses Association (VNA). NCTH was formed in 2016 and currently works under 4 priority areas: Intergenerational Physical Activity, Bikeability/Walkability, Lead Prevention and Access to Healthy Foods.