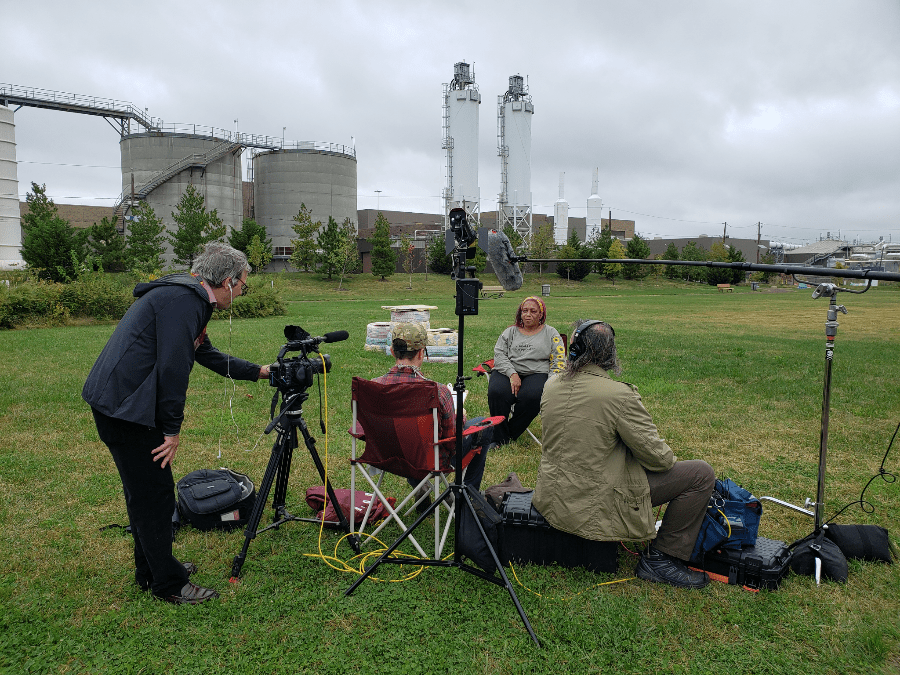 Recently, our friend Portia, a community gardener and resident of Waterfront South, sat down in Phoenix Park for an interview session with the NJ chapter of the Sierra Club.  The Sierra Club is producing a film focusing on the personal impacts of environmental racism and highlights some of the policies that allow for such poor air quality in cities like Camden.  Similar interviews are being conducted with residents from environmental justice communities all over the country.

The interview took place on a balmy day in a rather beautiful park on the waterfront.  The park, which opened in 2017, occupies a former brownfield site whose remediation was completed over the course of three years.   The remediation removed the contamination left by the previous occupant, a mineral processing facility.  This space is one of the only access points to the waterfront, which is otherwise dominated by private industry.  This restoration of natural space and reconnection to the water represents a successful project completed for the public good – one of the few examples in a neighborhood that has long been dominated by the needs of polluting industries.

The setting provided a nice contrast to the subject matter of Portia’s interview, which centered around her experience as a resident in a neighborhood that endures a constant assault of air and noise pollution from the 25+ industries encircling her community.  She paints a picture for viewers of a community filled with hard working people who have become somewhat desensitized to the threatening atmosphere around them.  They know that rates of asthma are high, they know that other communities do not have to live with the truck traffic, explosions, fires, particulates, smells, and unseen toxins, but because they live with these threats every day they become normalized.  This is especially true for the young.  Portia has not spent her entire life in Camden, and has personal experience living in communities that enjoy clean air and a quiet environment.  During this interview, she drew on those comparisons to help point out the injustice of allowing such sacrifice zones to exist and emphasized the elevated baseline levels of stress produced by living in such an atmosphere.

Despite the very real environmental challenges, Portia enjoys living in Waterfront South because of the people and she made sure to highlight the strong sense of community that exists here.  It is a place, she believes, that is worth fighting for.  CFET was excited to help connect Portia to this important opportunity to speak about her experience and is looking forward to seeing the finished product from the Sierra Club!