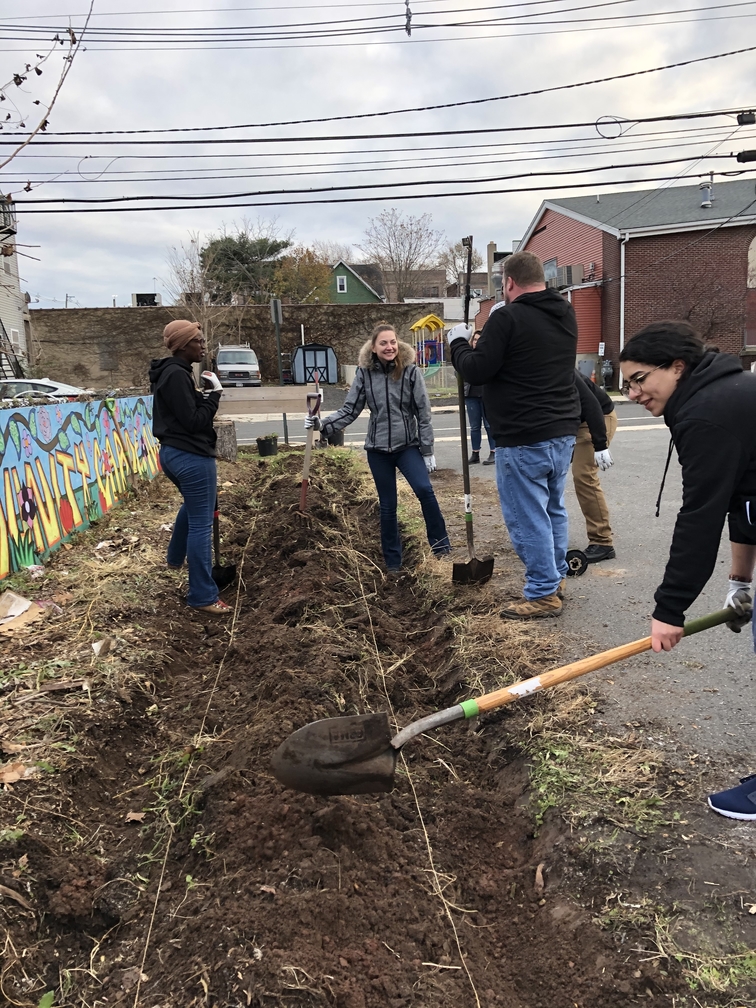 The Promise Ag Team’s intention is to provide honest information about the triumphs and trials of growing food in an urban setting, as well as the inequities supported by the current food system in the New Brunswick, NJ area. On our website, you will find the mission statement for Elijah’s Promise: “Elijah’s Promise harnesses the power of food to break the cycle of poverty, alleviate hunger, and change lives.” But what is “hunger”? It’s some combination of a personal experience, a medical condition and a social problem. It’s too simplifying to say that there are hungry people and not-hungry people. You might be extremely hungry if you miss breakfast, but you may not be food insecure, meaning that you generally have the resources to be able to eat the foods that you want to eat when you want to eat them. And even though hunger is this individual experience, we can’t keep talking about it in a vacuum away from other causes or conditions like low wages, racism, sexism, domestic violence, and lack of affordable housing. We have the chance to shape the way that we understand the problem of inequality and injustice in the U.S. rather than perpetuate the imprecise, shallow thinking around food justice that the dominant narrative “hunger” sets us up for. This blog is an opportunity for the Promise Ag Team to position the food system in its actual context, which is just as political as it is personal. In doing this, we hope to challenge “hunger” and make a dignified shift for the people we serve.

Here is some background on the New Brunswick community, which we serve:

As of 1635, thousand-year-old Lenape towns covered the area that would become New Jersey. In fact, the Lenape village of Ahandewamock was located along the Raritan River, right near present-day New Brunswick. According to the seasons, the Lenape would move between their villages and areas along the Raritan Bay. In the spring, the Lenape would plant crops within their villages. Come summertime, they would move to more temporary shelters near the breezy bay, eating fish, clams, oysters, and mussels. In the fall and winter, they would return to their villages to harvest their crops.

Italian explorer Giovanni de Verrazzano is typically credited as the first European to reach the Raritan Bay and to report interactions with native Lenape in 1524. As of 1613, the New Brunswick area was part of the Dutch colony “New Netherland.” In 1651, when the Dutch purchased land from the Lenape, they began to entertain the idea of settling the land themselves. Before that time, New Netherland operated primarily as a source of land and resources that would fuel European trade. Eventually, a settlement known as Hollander Dorp or “Dutch Village” was established directly across the river from present-day New Brunswick. At the same time, the English were expanding their borders into the Dutch colony. In 1674, the Dutch permanently ceded all of New Netherland to the English as a part of the treaty that ended the Third Anglo-Dutch War.

Since then, New Brunswick has seen many waves of immigrants. In the late nineteenth century, the city’s developing businesses attracted immigrants from countries like Italy, Ireland, and Hungary. During and after World War II, a wave of Puerto Ricans set the groundwork for more spanish-speaking immigrants to arrive. Most recently, New Brunswick has experienced a wave of immigration from Central and Latin American countries including Mexico, the Dominican Republic, and Colombia. It has also received many Asian immigrants, mainly from India and the Philippines. There is also a burgeoning Carribbean community.

Elijah’s Promise began as a soup kitchen in 1989, founded by three New Brunswick churches including Saint John’s Church, Emmanuel Lutheran Church, and Christ Church. This is the same soup kitchen that operates today on 18 Neilson Street. Since then, we have grown to include a culinary school, catering program, social services, and many other components within the agency. Promise Agriculture began about 10 years ago along with the conception of the community garden. Our initial intention was to provide growing space for New Brunswick residents. The garden site expanded to include an apiary, an orchard, a composting system, as well as a space for education, community gatherings, and volunteer opportunities. Promise Garden operates through a land-use agreement with the United Methodist Church. This includes 50 raised beds that are available for New Brunswick community members to take up gardening in.

A recent trip to the New Brunswick Public Library revealed to us that Promise Garden sits on land that was once a graveyard for the First M.E. Church. Yeah, you read that right. The graveyard was established in 1830 and has since changed hands from its original owner to the United Methodist Church. (The UMC is actually an amalgamation of 3 other congregations. In 1961, the First M.E. Church merged with 2 other congregations to form the UMC.) As time passed, the families of those buried in the cemetery moved away and were no longer reachable by the church. Before it was a Christian burial ground, it has been suggested that Promise Garden’s land used to be a slave burial ground. Others have said it used to be a Cherokee burial ground. There were also suggestions that any bodies buried there had been exhumed. Because we are still so unsure of its history, we’ve decided against any farming practices that might involve digging into the land. Instead, we’ve built upward by using raised beds and sheet mulching techniques. In an article from the 1920s, one author describes the graveyard as a place of solace where residents would actively make space for themselves to clear their minds. We hope this is something that holds true under our tenure on the land.

Promise Ag expanded in the fall of 2017 to include a 55 foot polytunnel, adding a production-focused element to our department. Produce grown at the High Tunnel allows the Promise Ag Team to support other E.P. programming like Let’s Cook for Kids, the soup kitchen, Promise Culinary School, and Promise Catering. We use no-till small scale methods to provide fresh produce as a supplement to all of our other produce sources. The High Tunnel, in addition to partnerships with local farms, gives us the opportunity to serve nutritious produce-oriented meals to soup kitchen guests. In addition to this, it allows volunteers, community members, and the Promise Ag Team to deepen their connection and understanding of land in the context of the U.S. food system.

Some questions for blog-readers to ponder: How do you relate to land? What does it mean to be physically close to land in your own life?

What has Promise Ag been up to?

In October, we seeded our oat cover crop inside the high tunnel. Oats do not root themselves very deeply in the soil, and won’t restore as many nutrients as a legume cover crop might. However, oats act as an excellent smother crop that outcompetes weeds. Weed pressure at the high tunnel has been especially heavy in the outer rows.

In November, we planted garlic in 3 rows outside of the high tunnel. How? We took apart garlic bulbs that had been saved from the previous season and planted individual cloves, leaving as much of the skin on them as possible to protect against the elements. For reference, the pointy side goes up toward the sky. Garlic is commonly planted between Halloween and Thanksgiving, and therefore experience much of the frost that occurs during that time. Frost can push the bulb up toward the soil, exposing the garlic to the wind which is ultimately their biggest threat. In this case, you’ll want some sort of mulch covering to lay over the beds. We used shredded leaves, but you can also use straw or grass clippings. If you have the ability to cover the garlic with some sort of mulch, the bulbs can be planted 2 inches into the soil. If you are unable to mulch them, plant the bulbs 5 inches deep in the soil. In both cases, keep the bulbs 6-8 inches from each other to avoid competition for soil nutrients.

Half way through November, we placed a tarp over 7 beds outside of the tunnel in an attempt to reduce weed pressure in the upcoming growing season. The heat and moist climate inside the tarp play a trick on the weeds and actually encourage growth. Eventually, after the weeds germinate and begin growing, they die off because the tarp prevents any sunlight from reaching below it. We talked about this project for a few months before we finished it (oops), using our time to gather random heavy objects to hold the tarp down. You can do it, too! We used heavy pieces of wood, giant crews, and stakes, and bought a regular blue tarp. Cover your soil as soon as you finish harvesting your bounty! Don’t leave it stripped bare.

We hope that this page will be a place for you to take from and give to, a source of educational information and a vehicle for community collaboration.