Scavenger Hunt Through the Neighborhood Sites in Waterfront South Camden 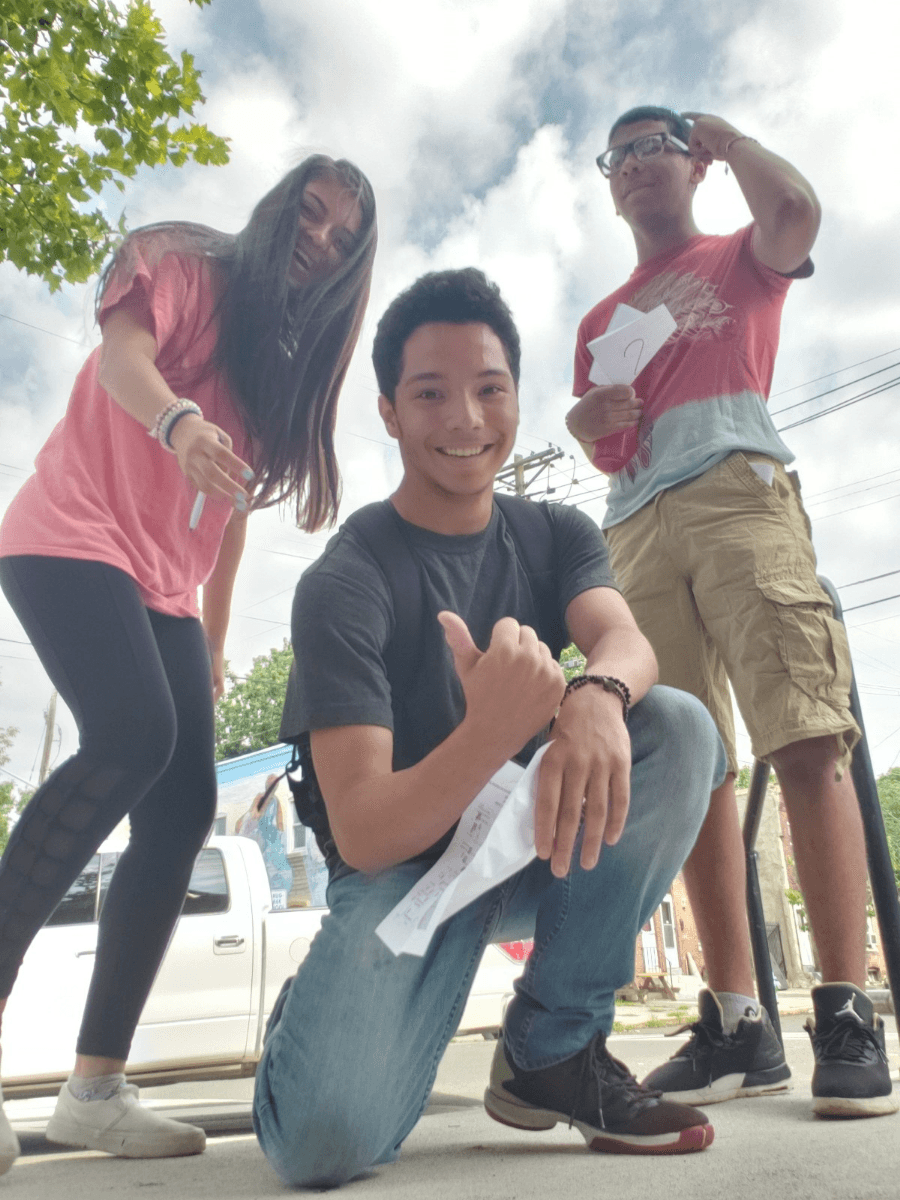 The following blog was written by Anisa, who was an Eco Intern at CFET last summer and was promoted to Youth Leader this year.  She also volunteers at Mighty Writers at the Nick Virgilio Writers House in Camden and is a recent high school graduate.  Anisa heads to college in the fall and we are expecting continued great things from her.

On July 3rd, 2019, we at the Center for Environmental Transformation (CFET) had our orientation for incoming Eco Interns. We discussed the rules and expectations for CFET staff and practiced the skills necessary for various tasks such as our Farmers Market and proper tool care in the gardens. We were also granted the opportunity to learn more about CFET and its purpose. However, rather than sit around and be lectured on the history of CFET and Camden, all 12 of our Eco Interns were sent on a scavenger hunt through Camden. The stakes were high as each team fought for the promise of a singular opportunity: cleanup immunity after lunch on a specific date of our choosing. In the hot summer weather, we sprinted throughout the city, rushing to find clues before the other teams could catch up.

“Every time we saw another team we went into a full sprint, otherwise we were just jogging.” Eco Intern Nate Torres commented. The physical activity was invigorating for some, but a bit heinous for others. Eco Intern Celeste noted “Henry had so much energy… he was sweating bullets but still kept running.” Needless to say, the heat was definitely a factor, but did not stop everyone’s desire to win.

The clues were housed at various locations ranging from The Fireworks Arthouse, the Maritime Museum, and even our very own gardens. Clues could either be random trivia regarding the location, a request for a photo with a notable item, or a photo or video of a specific task. An example of notable trivia was regarding Eve’s Garden, which used to be Del Buonos Bakery. The bakery had an oven explosion which caused it to be closed down and become an empty lot. The lot then became a community garden and was named after a local resident. “I didn’t know there used to be a bakery behind my house,” Celeste commented upon learning the news. Another example of new found trivia was about Sacred Heart Church. One Eco Intern had noted how “it was nuts that the church was built in a year without machines,” as the church was hand made using round stones that were cut into rectangles. This new found knowledge left a lasting impression on us as we had never before been so involved in the history of Camden; we had only lived in it rather than become a part of it.

In regards to clues that had specific tasks, there were a myriad of combinations and activities for each team to complete. From making your own boat to making a basket, each team was tested on their skills in various fields. At the Field House, we were tasked with “making a basket” on the basketball court and video-taping the game winning shot. For some teams, players had the advantage of having someone who was good at basketball. However, that advantage didn’t always prove to be helpful. One team notes how their team member, Dynasty, “was the only one who could play basketball,” and yet took several tries to make a basket. In some cases, the problem was not the task itself, but rather, finding the location of the clue in the first place.

In order to properly navigate the streets of Camden, each team was given a map of all the locations. For some, locating each destination was easy, and for others, it seemed near impossible. Youth Leader Adrian commented how his team had “went to the wrong rain garden and the wrong orchard.” At another location, Adrian noted how “some guy at the dock told us that the clue was already taken,” despite other players having found the clue before them and left the third and final clue for the last team. Despite these inconveniences, each team still did their best to locate the clues within the two-hour time frame.

When the game had finished and each team was able to share their victories and failures, there were mixed answers from the interns. When asked how was it working with her group, an Eco Intern commented how “we had a really good group and had a lot of fun,” in regards to their experience in the scavenger hunt. Despite different feelings, the sentiment amongst the interns was shared as each team enjoyed their time together and learned about the city they live in and how CFET has impacted it.