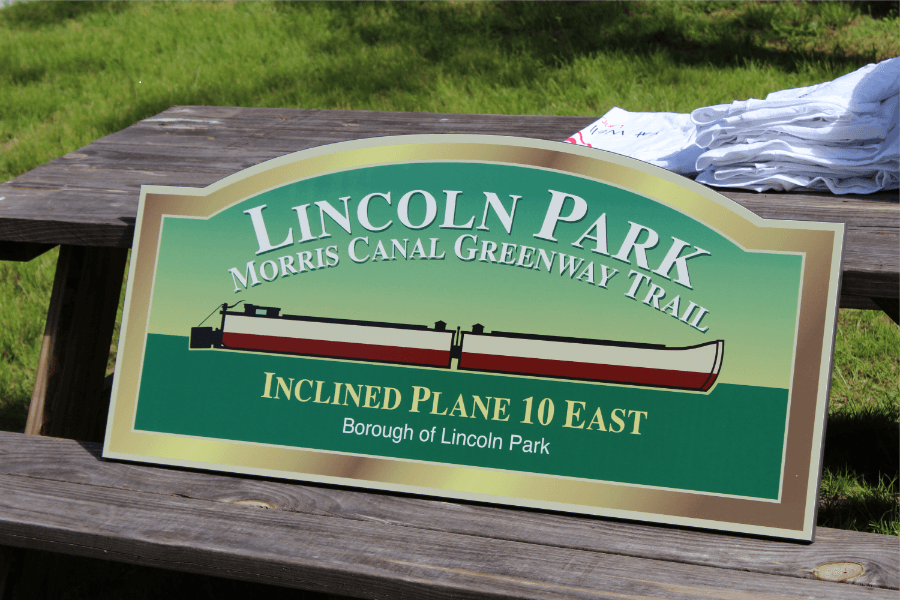 The following blog was written by Joe Macasek, President of the Canal Society of New Jersey. The Borough of Lincoln Park is sharing the perspective of our valued partners in working with us to achieve our goals.

In June 2017, Lincoln Park opened a new section of the Morris Canal Greenway trail. The project was funded by a generous grant from Atlantic Health System/Chilton Medical Center as part of the New Jersey Healthy Communities Network, an organization dedicated to creating healthy communities through active living and nutritious eating. Canal Society of New Jersey volunteer, local residents and Lincoln Park maintenance staff worked to clear the trail along a water-filled section of canal from Beaverbrook Road to the foot of Plane 10 East. This area was previously so overgrown that it was virtually impassible. The completed project includes bridges to span a low-lying area, rustic benches along the walkway, and a trail head kiosk with interpretive signage donated by the Canal Society of New Jersey.

Parking for this new section of Greenway trail is available at the Beavertown Historical Society, 173 Main Street, Route 202, in Lincoln Park. A spur trail connects to the trail head at the intersection of Windsor Drive and Beaverbrook Road. From there, a tree-lined path along the berm bank of the canal follows the intact canal prism, passing the Townhouses at Hunting Meadows, to a more remote and heavily wooded area beyond. The canal towpath once followed the opposing bank of the canal but now runs close to the tracks of the NJ Transit Boonton Line and has, in some places, been covered by the railroad right of way. Near the bottom of Plane 10 East, the canal widens to form a small basin with stone riprap sides still in place. A loop at the trail’s end offers an alternate return route.

Lincoln Park, originally known as Beavertown, lies among the fertile lowlands at the confluence of the Passaic and Pompton Rivers. The available farmland was expanded in 1811 when the New Jersey legislature allowed the vast marshland of the Bog and Vly Meadows to be drained for agriculture. Later, Beavertown experienced further development when the Morris Canal was opened to through traffic in 1831, providing access to an interstate transportation system. In 1872, the name of the town was officially changed from Beavertown to Lincoln Park.

The Morris Canal passes through Lincoln Park at the end of the 17.5-mile level stretching from Inclined Plane 11 East in Bloomfield to Lift Lock 14 East, and crossing the Pompton River on a 236-foot aqueduct at Mountain View. At Plane 10 East, straddling the Montville Township border, the canal begins its climb from the coastal plane into the North Jersey Highlands. The fall of water created by the plan led to the development of several water-powered industries that included Franciso’s Gristmill-Sawmill (remains of which can still be seen), Brunnen & Kennedy Dye Works, and the Lewis Elsberg & Company Peat Works.

The CCSNJ is proud to partner with the Borough of Lincoln Park to help make this new section of the Morris Canal Greenway a success. This year the CCSNJ plans to donate two new interpretive panels to be placed at key location along the trail. In addition we will be working the Lincoln Park to create a new trail head in Aqueduct Park where the canal crossed the Pompton River into Morris County. In the future, we hope to continue working with Lincoln Park to eventually connect the two trail heads with a pathway and interpretive signage as part of the state-wide Morris Canal Greeway project.

The Borough of Lincoln Park recognizes that partners are the key to achieve success in our grants. For this grant cycle, we are partnering with the Lincoln Park Elementary and Middle Schools, Chapel Hill Academy, the Canal Society of New Jersey, ShopRite of Lincoln Park and Montclair State University.